You should embrace Behavior Driven Development to work on your Infrastructure as Code IaC project. These principals will force you into writing tested code. A good starting point when starting with tests for infrastructure as code is the Test Pyramid. Where you want to have many quick and small tests to ensure your code does what is expected. However, when talking about Infrastructure Development there are slight differences to Software Development.

During the PowerShell Conference EU 2019 I had the opportunity to talk about Infrastructure as Code testing and what we learned in a large scale IaC and automation project. I covered a few fundamentals on IaC, unfortunately, the session on Friday had some technical problems and hasn’t been recorded.

The talk is addressing the following key topics:

Let me know if you have feedback in the comments below or @MarkWarneke!

When following the best practices for Infrastructure as Code by using a declarative approach to provision resources there really is no unit or smallest executable code to test except the configuration file itself. This file usually only describes the desired state of the system to be deployed. The specified system consists of one ore more Azure resources that needs to be provisioned. Hence, you should make sure your unit is thoroughly tested using available methods, tools and practices.

Having an Azure Resource Manager Template (ARM Template) as the subject under test we are looking into testing a JSON configuration file. I have not yet heard of a Unit Testing framework for configuration files like YAML or JSON; I am only aware of linter for these file types. 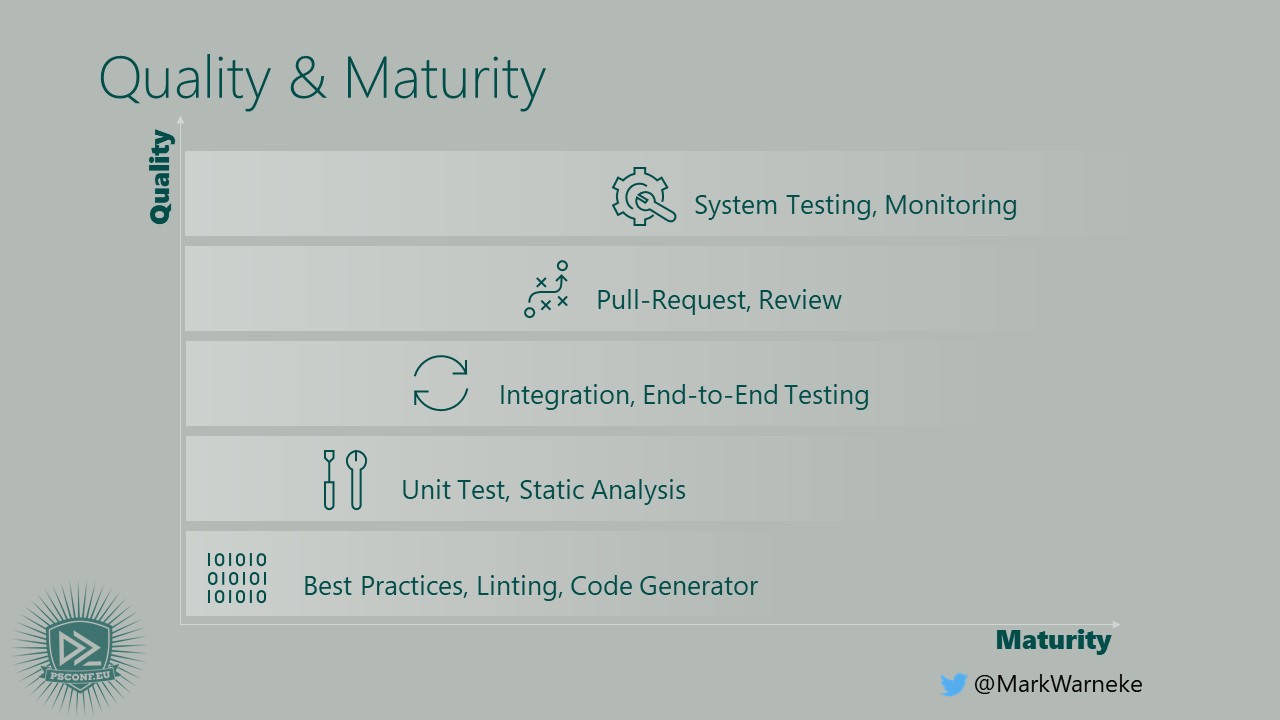 The Test Pyramid for IaC could look something like this. Where the x-axis indicates how mature the IaC project is and the y-axis indicates the quality of the IaC. This is of course a generalization and you should strive to implement all practices, starting from the bottom left and ending up in top right.

I personally refer to a unit tests for ARM templates as asserted static code analysis. By using assertion the test should parse, validate and check for best practices within the given configuration file (ARM template).

As we are not compiling or building a software product we can not rely on any compilers to throw errors on syntactical issues. See VDC codeblocks module.tests.ps1 tests and Az.Test azuredeploy.Tests.ps1 for different implementations of unit tests for ARM templates.

We found in our project that you can only safely say an ARM template is valid and deployable if you deployed it once.

As Test-AzResourceManagerDeployment is not invoking the Azure Resource Manager Engine, complex templates are not validated. The general guidance is: Let the Azure Resource Manager Engine expand, validate, and execute the template with all its necessary dependencies and parameters. That means, use the ARM template for a deploy at least once. This might refer to a System or Integration Test.

Deploying the solution will take time, but asserting on the deployed resource is very beneficial. This might be a controversial point and I would love to have a conversation on this topic, as some people think of this step as redundant and obsolete. However, we found it worthwhile having as it ensures the template is deployable. The integration test and therefore complete deployments are only needed on a change to the ARM template itself.

If you have additional imperative scripts like post configuration, custom script extension, DSC, you want to test I would emphasize to unit tests these scripts and Mock any Az native calls. You don’t want to test the implementation of commands like Get-AzResource, but test wether your logic of execution and written custom code is doing what is expected. Assert if your mocks are called and validate your code flow.

However, as these scripts communicate with the Azure REST API and might rely on dependencies and mandatory parameters an actual call to the API is mandatory to assert that the code is correct. It should be done at least once within the test suite The same applies to any post configuration or DSC. You want to make sure the configuration got applied.

We also found that a dummy deployment End-to-End Testing (e2e) will help to find missing requirements, missing dependencies, and deployment issues. Again, a controversial topic as this testing approach is similar to Integration Tests and therefore in a way redundant. A combination of both is probably a good approach depending on the resource.

Additionally, a good test should validate different input parameters. Having a deployment to multiple different Azure Regions can save time when troubleshooting a deployment issue to a new region. Some Azure Services are only available (or in Preview) in certain Azure Data-Centers. Keeping this in mind: All tests should consider different parameter combinations.

You probably want to make sure no deviation or configuration drift is happening. Using a test method called Acceptance Test of Validation Tests can save you a lot of time. These Tests are written to ensure a requirement is met. You can execute these tests on a given resource and validate if a specified configuration was applied.

Using the specification defined in a form of a Acceptance Tests. Multiple tests cases can be used combined for exploration testing or smoke testing on previously deployed resources.

Using a code generator to bootstrap you project saves time and implements best practices right from the start. The Az.New module has been created to demonstrate an example code generator for IaC project. The module will create a folder structure and a basic set of tests for the project. It is inspired by the code generator yo that was initially created for web projects. Ruby on Rails and Angular for example base the developer workflow on generating code, it is less error-prone and implements code consistency.

A good practice is to have regular peer reviews and rely on pull-requests to apply changes to the code base.

A branching policy prevents the immediate change to a given branch. It is a must to implement a branching policy when using IaC. The branching policy should enforce a required reviewer and foster the peer review concept. The review is therefore enforced on each change to the code base. The four-eyes principle increases Code Quality tremendously and helps knowledge sharing.

The branching policy can also enforce the assignment of tickets like change requests, features, or bugs. The policy can also associated a build pipeline. This pipeline will pre-merge the requested changes and execute the pipeline on the pre merged code. The tests are thus executed before the actual change is done to the code base.

Some resource deployments can take hours, e.g. VNet Gateways (~25mins). Having an integration test inside the build-phase might wast precious build time of the Build Agent. You might only want to leverage e2e tests for Azure Resources that take a long time to deploy. The right testing approach should be considered resource by resource.

I would recommend to relying solely on e2e tests inside a release pipeline if you are able to keep the resources provisioned. The build phase will therefore, limit the tests to the static analysis and linting of the ARM template. While the actual deployment happens the first time in the release phase. You can also limit it to only deploy on approval.

This approach will not trigger a new deployment on each change to the version control but on each new Artifact that is being published and the approval of the release. If changes to the template are minor only the changes will be deployed and the deployment should be rather quick, if the resource existed.

This kind of test will result in costs if the resources are not cleaned up periodically.

I would recommend Preview-Artifacts. these Artifacts can be leverage to use this kind of Release-Pipeline testing. These artifacts are not yet officially published and might have a Beta or Preview indicator. These artifacts should only be used for demo or testing purposes.

The results of the test phase should be provided to the developer as quickly as possible to reduce the time to wait for feedback. CI/CD tools often allow you to create dashboards and summaries of the tests. Make use of this visible feedback to ensure the IaC is always possible to be deployed.

The result of a build phase, if successful, should always create some kind of Artifact. Similar to a compiler but for an IaC configuration file. Only after an actual deployment and the validation of the requirements on the deployed Azure Resource took place an artifact could be considered build, it is also known as Continuous Integration. Only then the build Artifact, in this context the ARM template, is valid. An Artifact will have a dedicated traceable version number and should contain release information and a change log. Other teams can subscribe and get notifications on new Artifact versions.

The created Artifact is used to release and deploy to the first environment - Continuous Delivery, usually a Development (Dev) or Beta environment. You can use a dedicated Azure subscription or a naming convention inside a resource group. I would recommend to have at least dedicated subscriptions for different environments.

After the deployment to the first stage is successful you can execute the automated Acceptance Tests and have a gate that notifies Key Users to run User Acceptance Tests on the particular ‘test’ environment. User Acceptance Tests can be managed and monitored through Azure DevOps Test Plans. Only after the approval of a release manager, if all tests result from the key users are green, the next Stage e.g. Pre-Production or Staging should be triggered. This staging and deployment from one environment to the next is considered Continuous Deployment. Continuous Deployment should be the end goal of every Infrastructure as Code project.

There are two views one could have on testing we refer to these as the InnerLoop and OuterLoop. The InnerLoop is the view of the Developer.

The requirements of a Developer are usually: quick feedback, quick execution, and a smooth workflow.

Tools like linting integrate easily into the workflow of a developer. A good practice to have for the InnerLoop are convention and consistent formating. Consistent code styles and formats prevent errors and increase productivity. @RobinManuelT create a great blog post describing his setup to enforce a consistent Coding Style across projects and programming languages. Creating Code generators will not only save time but also increase consistency throughout the code base. An example can be found in the Az.New module. There are also multiple VSCode Extension that generate chunks of codes while developing. VSCode Snippets can be used to implement custom code completion.

The developer needs to be able to work independently and execute tests locally, so she is able to test the code before check-in. To rely solely on a release pipeline is not recommended, as the pipeline could be overcrowded and the developer might be missing the access to it.

Visual Studio Code is the go-to editor when developing Azure Resource Manager templates. Its extensibility and configurations, makes it a powerful editor of choice.

easy code styles could be enforced by using a .vscode/settings.json in the root of a VScode session.

There are open-source projects that work on creating an Abstract Syntax Tree (AST) from an ARM template, this could be a huge game-changer Twitter: Chris Gardner.

The Azure Resource Manager Schema Files are located on GitHub. A simple way to ensure a JSON file has the correct syntax is to validate the JSON against its schema. You can leverage Get-xAzSchema from the xAz Module to obtain a given Resource Schema by Provider Name and leverage PowerShell Core 6 Test-Json to validate.

Once resource that is highly valuable is DevOps at Microsoft. This reference is a must-read. One particular interesting read is the Shift Left to Make Testing Fast and Reliable. This article describes the journey of moving to L01/L1 Tests which are essentially Unit tests.

We push the accountability to the person who is writing the code. Test Principles